Mar 07, 2017
The Light Rail 2017 Conference featured great presentations and a sizeable crowd of industry experts and professionals – if you missed out, here’s a quick recap. By Ben Dvoracek

On 21 and 22 February, I had the pleasure of attending the Australasian Railway Association’s light rail-centric event in Queensland, Australia. The Light Rail 2017 Conference featured great presentations and a sizeable crowd of industry experts and professionals – if you missed out this time, here’s a quick recap of the themes explored at the event.

There is a surprisingly large amount of light rail projects on the go and upcoming in Australia. Besides the new Gold Coast-based G:link and Melbourne’s well-established Yarra Trams, there are also projects underway in Sydney, Parramatta, Newcastle and Canberra.

The light rail renaissance is expected to be a catalyst for urban renewal and regeneration. In the Gold Coast, where light rail has been running since 2014, the G:link carries the equivalent of the city’s population every month and has helped to increase local public transport usage by 32% (2013/14 compared to 2015/16)¹.

However, it’s not all smooth sailing with these new projects: light rail can have an initial negative reaction from the public and the media. The political challenges can range from feasibility studies going over budget to an unhappy retail industry and public during construction.

It is important to highlight the value and economic benefits that light rail brings to the community in order to seed positive reactions and build momentum for public support as you implement the project.

Light rail can and does have a big impact on the economy; while people may experience inconvenience during construction, the long-term benefits are proven. 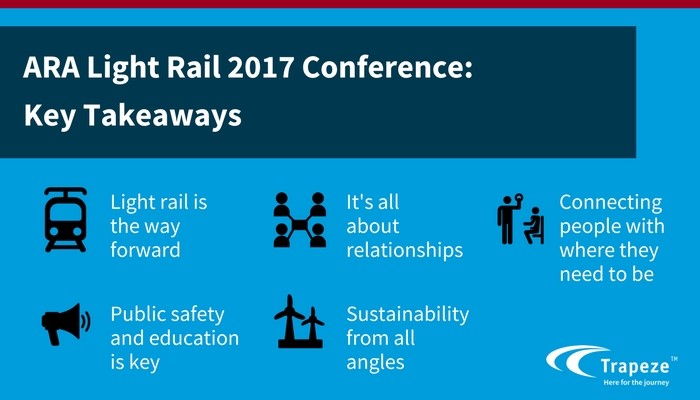 There are so many moving parts involved in light rail – not just during conceptualisation, construction and initial implementation, but also for daily operations and maintenance once services begin.

Ideally, you should deploy an asset management system from the start so you can reap the benefits of full lifecycle management during construction all the way through to live operations. This makes your light rail operation more sustainable as maintenance tracking of assets from the outset will ensure your assets last longer.

Interestingly, the industry in Australia does not currently have something tailored to rail that works for maintenance staff. The Trapeze Enterprise Asset Management system was developed in North America and built for maintenance; with over two decades of R&D and refinement, it has extensive capabilities that allow you to track every asset from rolling stock to linear assets to railways stations. If this sounds like something your organisation could use, read more about it here.