Main takeaways from the joint BIC and NZ BCA conference. By David Eason.

Main takeaways from the joint BIC and NZ BCA conference. By David Eason.

The 2018 Australasian Bus Conference was jointly organised by the Bus Industry Confederation (BIC) and the Bus & Coach Association of New Zealand (NZ BCA) in Cairns from 7 – 10 October.

If you’ve never been to this event before, one of our customers Leanne Griffiths (Red Bus Services) summarised it as a place for bus operators to get together and consider the long-term planning and shaping of the transport industry.

Here’s a quick summary of what happened:

Cities within commuting distance to capital cities, such as Geelong and Toowoomba, were also seeing growth as people choose to buy homes there and commute to work.

With our cities getting ever more crowded, there is an obvious need for more public transport services to ease congestion and improve liveability. The private car is still dominating, with 80% of passenger kilometres in capital cities travelled in this mode. 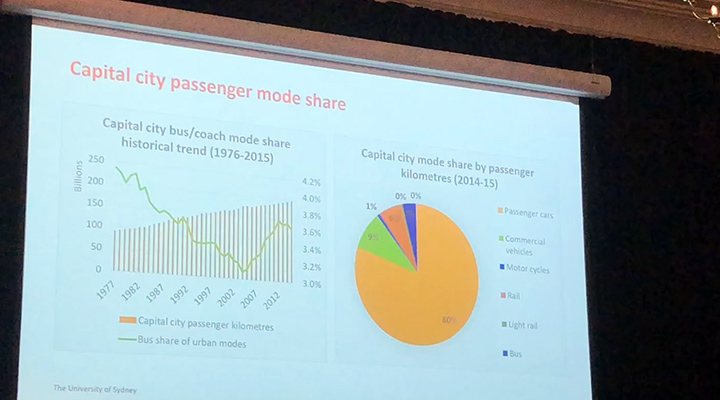 To cope with this increased density without increasing congestion, it is clear that industry and government need to work together to make public transport more attractive and move people out of their cars and into mass transit vehicles.

While this is a challenging task, it also opens up opportunities for the bus industry: many transport authorities and political representatives at the conference expressed their eagerness to start a dialogue with operators and collaborate to realise their visions of an integrated transport network.

Bronwen Clark from the National Growth Areas Alliance spoke about the importance of collaboration between all levels of government – local, state and federal – to improve liveability in our cities as well as the surrounding areas.

For instance, suburbs often experience significant congestion during the AM and PM peaks as residents converge on one main road to drive to or from the CBD.

Bronwen Clark of @NGAA_AU explains the City Deal for Western Sydney and the factors that need to be considered relating to #movingpeople #c21conference pic.twitter.com/aUadHQ6G6z

Both Ms Clark and Adrian Beresford-Wiley from the Australian Local Government Association encouraged bus operators to approach their local governments, as this level of government had a greater interest in social coherence and inclusion.

While bus operators have traditionally engaged state governments, there is potential for local governments and transport operators to collaborate and take their ideas for improving public transport to the state instead.

The excellent work being done by APTIA, BIC’s industry arm, has led to numerous government representatives favourably viewing engagement from the bus industry.

Anthony Albanese, the Australian Shadow Minister for Transport, Infrastructure, Cities, Regional Development and Transport, told us that he was an advocate of the 30-minute city and wanted to see more collaboration between governments and operators to make this happen.

Phil Twyford, New Zealand’s Minister for Transport, said he was keen to hear from industry on how we could transition to an all-electric fleet and improve safety.

As Michael McCormack, Australia’s Deputy Prime Minister and Federal Minister for Infrastructure and Transport, said, “You have the ear of government.”

The Liberal and @The_Nationals Government is committed to building better roads to help people get to their destinations safer and sooner.

The Elephant in the Room: Autonomous Vehicles

With autonomous vehicles having been promoted as a silver bullet to all public transport woes in the past, this is perhaps unsurprising.

As Professor Graham Currie of Monash University pointed out, simply replacing all the cars on the road with driverless cars will not reduce the number of cars – getting people into mass transit vehicles like buses and trains is still essential.

John Calabro, the Chief Operating Officer of Transit Australia Group (TAG), gave an update on his company’s autonomous vehicle trials in South Australia and was cautiously optimistic about this technology’s potential. There is still need for more testing and development to fully mature these vehicles, as well as updated rules and regulations.

We are currently doing our own trials in Switzerland, where we successfully integrated an autonomous bus into the public transport operations control system (a world first!).

If you’re interested in reading the latest on autonomous vehicle trials across the world, my colleague David Panter explores this in his whitepaper:

With the governments’ appetite for trials and tests with autonomous vehicles not waning, it is unlikely that driverless vehicles will go away. However, the future is far from certain:

Geoff Allan from the National Transport Commission probably made the most realistic prediction, saying that transformation is evolutionary and change incremental.

There are over 700 laws that need adapting and dozens that need to be added before we can have a fully autonomous vehicle on the road; while this is happening, we need to ensure we are ready for change and able to adapt as needed.

The clear message throughout the conference was that governments recognise the importance of public transport for managing population growth and retaining the high liveability standards that Australian cities are known for.

This means that it is important for bus operators to continue engaging with all levels of government to ensure their voice is heard in planning and development discussions, whether that is one-on-one with a local council or through the work that APTIA is doing in creating submissions and meeting with ministers.

As Michael Apps from BIC said in his wrap-up speech:

“This industry is a growth industry. The opportunity is there to increase patronage numbers.”

It’s up to us to pull together and work with transport authorities to continue improving public transport in our communities.

Interested in MaaS or on-demand transport? Read Generation Z: Your Guide to the Future of Public Transport, which recaps the Australasia Bus Conference talks on these topics!

Introducing Corvanta! A new patient-centric brand has been launched from the former Emergency Services business of Trapeze. Read the full Press Release to Learn More.

In this Transit Unplugged TV episode, Paul dives into the details with Ahmad Bahrozyan, CEO of the Road and Transport Authority (RTA), as he shares their vision of autonomous vehicles and air taxis.