I recently spent a week in Australia visiting with top rail and bus transport leaders to learn how they approach the increasing demands for mobility in their island nation. I met primarily with the CEOs in Melbourne, Sydney and the Australian Capital of Canberra to discuss their careers, their operations and future approach to mobility for my podcast, Transit Unplugged. I met with:

Jeroen Weimar, CEO of Public Transport Victoria (PTV) – Mr. Weimar is the top government official overseeing transport service throughout the state of Victoria (which includes the city of Melbourne) and the numerous contractors and employees who provide the services. His services provided over 565 million trips last year on rail, tram and bus with a 6.5% increase in ridership over the past five years.

Raymond O'Flaherty, CEO Metro Trains Melbourne (MTM) – Mr. O’Flaherty oversees the rail service in Melbourne under contract to PTV. This above and below ground metro rail service operates 220 six car train sets on 600 miles of track on 15 lines and at 219 stations throughout the city providing over 240 million annual trips.

Emma Thomas – Director General, Transport Canberra – Ms. Thomas oversees the bus service in Australia’s capital city of Canberra. They are about to open the city’s first light rail line. She was the only native Australian in a transport CEO role that I met during my visit.

Steve Butcher, EGM, Rail, John Holland – Mr. Butcher oversees the company that provides design, build, finance, operations and maintenance for many of the rail projects throughout Australia and serves on the Board of Metro Trains Melbourne.

Howard Collins, OBE - CEO Sydney Trains and acting CEO NSW TrainLink – Mr. Collins oversees the operations of the entire train transit network in Australia’s largest city of Sydney and the state of New South Wales (NSW) and nearly 15,000 employees. Sydney Trains operates on 506 miles of track and 178 stations over eight lines. It operates on train frequencies of every three minutes or better in the underground core, 5–10 minutes at most major stations all day. In 2017-18, 360 million passenger journeys were made on the network.  While there, Howard gave us a tour of their almost ready to open, amazing new Rail Operations Center (ROC). 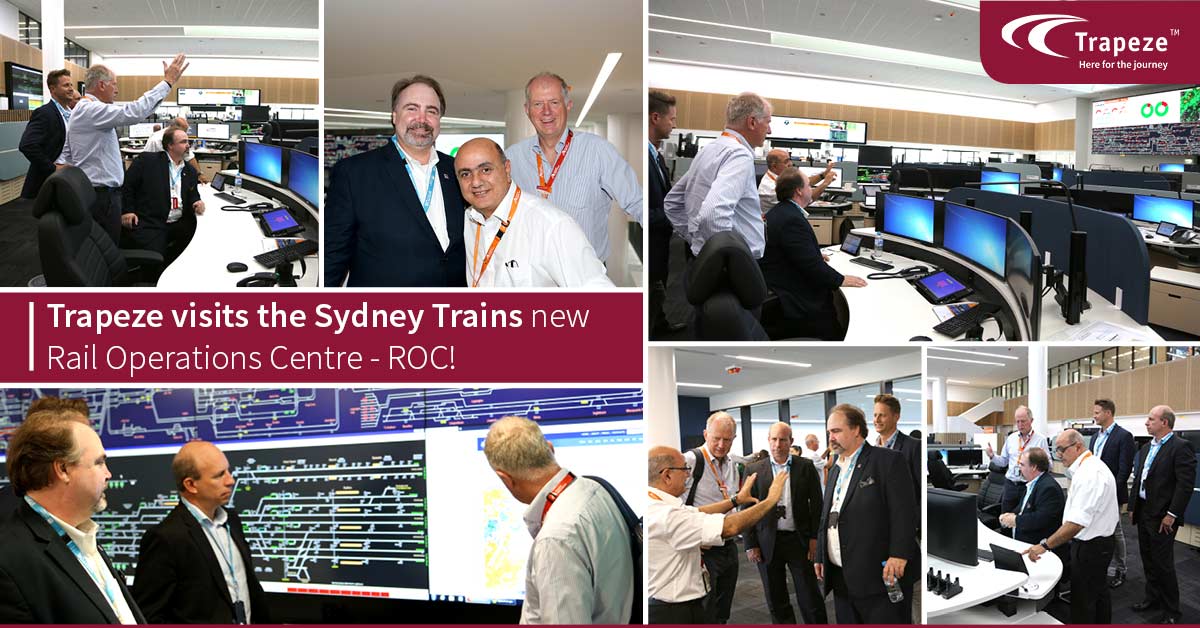 After speaking with these seven top Australian Transport CEOs, touring many of their operations, meeting with their and UITP local staff and even Professor Graham Currie, world-renowned transport guru and Chair of Public Transport at Monash University, I identified at least three trends that may be informative to transit operations here in North America:

1. The power of rail mass transport in big cities far outstrips any other mobility solutions on the horizon.

All of the transit leaders I spoke with showed how newer solutions that are capturing attention across North America aren’t really even registering there in Australia except to potentially serve their rail networks. Autonomous vehicles, Shared Mobility options like TNCs, Mobility as a Service and Micro Transit are all viewed as potential first and last mile solutions to get passengers to rail stations or assist them in their rail journeys.

While I was in Melbourne the nation’s Prime Minister was in the city announcing a new rail service expansion to the airport. When I was visiting Howard Collins in Sydney, he noted that the day before he had led the re-opening of an old rail station in a small town in rural NSW, Australia that was celebrated as a new lifeline for commerce and tourism there.

The state and federal governments in Australia have a $50 billion expansion commitment to rail transport. It appears the nation’s governmental and transport leaders are in agreement that rail mass transport is the best option for moving large amounts of people safely, efficiently and reliably.

Most of the actual rail operations in the major cities and countryside are operated under contact by the state governments to private companies like Keolis Downer, Transdev, Metro Trains Melbourne (a joint venture between MTR Corporation, John Holland Group and UGL Rail) and others. It appears Australian governments have concluded that the safety, efficiency, reliability,  world-wide experience and stable cost projections for future years that is provided by outsourcing operations to major companies for most passenger rail service meets their needs best. They often use longer term operations contracts (e.g. 7 years) to allow for more investment by the contractors. For example, in September 2016 it was announced that an extension of the Melbourne metro train franchise had been granted to Metro Trains Melbourne until November 2024.

Here in North America many commuter rail and bus operations along with paratransit are contracted out, but in contrast, most transport agencies here still operate their core bus, light rail and metro subway systems directly with their own employees.

3. Strong experienced leadership along with a commitment to capital investment is necessary to provide top notch transit services.

One thing that stood out to me was the tenure and experience of all the transport CEOs there in Australia.  Several had started their careers in the UK at Transport for London (TFL) and had learned operational management expertise in on-the-ground positions there. Now in the zenith of their career they lead some of the largest and best run mass transit operations in the world with the wisdom, maturity and experience gained through decades of service in the industry.

It also became clear that the leaders of Australia now understand the importance of capital investment in rail and public transport as a key to fueling the economic engine of their cities. With major cities not able to add lanes to downtown roads, the only way to get more people into their cores for jobs, shopping and tourism is through mass transport. Like education, emergency services and roads, the Australian people and their leaders have accepted rail and bus mass transport as essential governmental services worthy of a high priority for subsidy.

Finally, my overall impression from my visit to Australia’s major transport systems was that “if you build it, they will come”. Meaning, great mass transport attracts riders. All of the services I visited were in growth mode and were focused on carefully calibrated improvements in efficiency to maximise existing routes and widely hailed expansions funded by state and federal governments. Lessons to learn. Articles
Authorities & Operators: Working Together for the Greater Good
Contact Us Schedule a Demo View Solutions