Apr 04, 2018
Find out what happened at the exhibition/conference Transport for London calls “an experience never to be missed”! The Dubai Roads and Transport Authority calls it “the best and most informative event in its category” while Transport for London describes it as “amazing”.

Middle East Rail is the largest conference and exhibition for the rail industry in the Middle East, North Africa, South Asia and Central Asia, and describes itself as the event that connects two continents. If you were not able to attend, here’s a recap of what happened:

A region of growth and opportunity­

With US$346 billion worth of active projects in the Middle East / North Africa (MENA) region, rail is definitely booming here. Many exciting infrastructure projects are in the pipeline or underway in anticipation of a population spike as part of the many changes sweeping this part of the world. One of the most ambitious visions discussed at the conference was the consolidated commuter line that would transport people from anywhere to anywhere within the United Arab Emirates (UAE).

Ben Dvoracek, Trapeze Asia Pacific’s Director of Sales and Business Development, attended a roundtable discussing the rail projects in Oman. Oman is also developing its rail network for freight, with a long-term aim to introduce passenger lines that connect to the UAE network. The unique landscape and weather patterns bring into play some unique challenges that require thought and planning – it’s one to watch!

The event provided plenty of fantastic networking opportunities to meet rail operators from across the region and discover their challenges. From international players like Alstom and Transdev to key movers and shakers in the Middle East such as Etihad Rail, Saudi Railways Organization and the Arabian Railway Company, they all had unique stories and solutions to share. 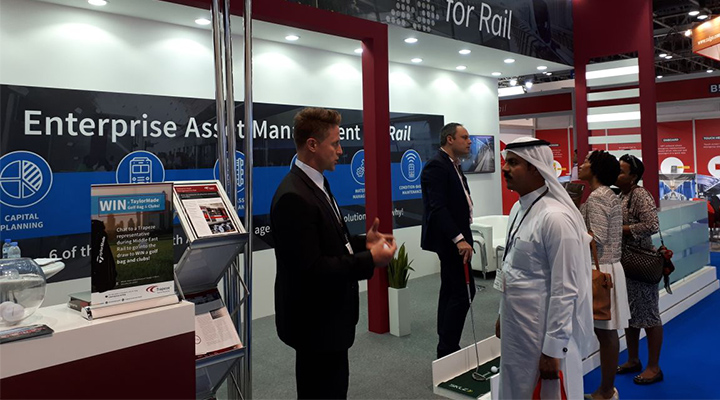 Our esteemed colleague from the United States, Marcelo Bravo, presented on Day 2 of the event. Marcelo has over 25 years of experience in the rail industry and is the Industry Solutions Manager for Rail at Trapeze North America.

Maximising the Potential of Enterprise Asset Management (EAM) Through IoT

The Internet of Things (IoT) has been the subject of many discussions since the 1990’s, a hot topic for innovators even before we had today’s mobile devices, high-speed connectivity and incredible internet bandwidth.

Marcelo's presentation explored how the IoT concept can revolutionise asset management for the rail industry by reducing the cost of maintaining assets, increasing asset availability and supporting superior decision-making for capital investments. 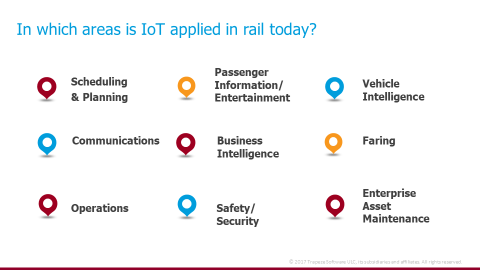 Marcelo also chaired a roundtable on How the Middle East Can Become a Global Leader in EAM featuring senior executives from various transport authorities and rail organisations in the region – read the recap here.

We met many different people from all over the world, but all of us had a common interest in the rail industry and in the Middle East’s growth. It was great to see everyone work together to envision and provide world-class rail systems in the region; we wouldn’t be surprised to see some of these futuristic rail technologies playing a part here.