Growing is Easy(ish). Being Scalable is Hard.

You may be feeling like bigger is better when it comes to competing for contracts, or you could be thinking about the economies of scale that come with an increase in size. Or perhaps your company has just grown organically over time as you pick up more services and you’ve doubled your staff headcount from what you started out with.

So why is scalability something that you should be thinking about?

When they say necessity is the mother of invention, they weren’t kidding. Small companies have a genius for finding ways to get things done and keep operations running despite a lack of resources or funds. However, as your company grows, many of the workaround measures and manual practices that used to be manageable as a small business become unsustainable with time. The processes that used to save you money will start to cost you time and efficiency.

How will you know when it’s time to take action?

If you take a step back from day-to-day operations and think critically of the way your staff does things, are they doing in a time-consuming way for no reason other than “we’ve always done it this way”?

Is there any admin task that requires a disproportionately large number of people handling it before it can be completed?

Are you seeing errors caused by a dependency on repeated data entry by different people into different systems?

And most importantly, is there any process that is bearable right now in terms of difficulty and time to perform but which is going to be unmanageable if you add on more buses, drivers or services?

If any of the above apply to you, you need to consider making a change sooner rather than later to make your company more scalable. 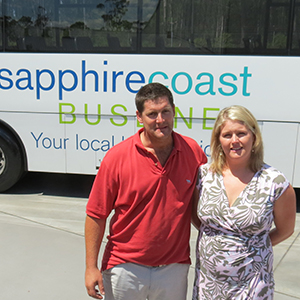 Sapphire Coast Buslines (SCB), formerly known as Deane’s Buslines South Coast, is a family-owned bus operator in New South Wales. Like most small businesses, SCB was reliant on manual processes and kept paper records. This state of affairs was tolerable at first, but as the company grew it became clear that they were reaching a crisis point.

“We were just hanging in there at the size that we were. We knew that if we wanted to get any bigger, we needed to change the system. It wasn’t sustainable.”

What can you do if you need to act?

If you’ve spotted some inefficiencies or found an unsustainable practice within your company, you will need to study the process and work out where things are falling over. Once you have worked out the source of the problem, finding the right solution will become much easier.

For Jamie and SCB, it was clear that the ability to share information between departments without doubling up or creating extra work was critical for the company’s continued growth. The huge amount of time staff members needed to complete tasks and the process failures caused by manual systems led her to decide an integrated Enterprise Resource Planning (ERP) system that could automate processes and streamline record-keeping was the right solution for SCB.

“As soon as I did the financial case study of what we would gain with an integrated operations management system, it was a no-brainer,” said Jamie.

“If you’re doing things manually, your data entry is just way too hard. Your error rates will be so much higher than you realise it is – you won’t even know half the errors you’re making.

“If you’ve got an integrated system, it will cut all of that down and give you time to work on your business instead of in your business.”

What are the results?

“The biggest win was knowing that our data was more accurate. We were able to meet our KPIs more efficiently, avoid fines and save costs with Trapeze.”

Thanks to the scalable nature of Trapeze’s ERP solution, SCB has grown its fleet by 50% without incurring significant administration overheads. The company also saved $30,000 a year in administrative costs following the solution’s implementation.

To find out how Sapphire Coast Buslines grew by 50% without incurring significant administrative costs, read the full case study.

Trapeze Group works with public transit agencies and their communities to develop and deliver smarter, more effective public transit solutions. For more than 25 years we have been “here for the journey,” evolving with our public transport customers around the world helping them to move people from point A to Z and everywhere in between.

Introducing Corvanta! A new patient-centric brand has been launched from the former Emergency Services business of Trapeze. Read the full Press Release to Learn More.

In this Transit Unplugged TV episode, Paul dives into the details with Ahmad Bahrozyan, CEO of the Road and Transport Authority (RTA), as he shares their vision of autonomous vehicles and air taxis.